*** The International Conference History of Higher Education: Student Movements, Human Capital and Expert Culture was held at Bucharest (at the University of Bucharest, Faculty of History) in 18th and 19th November, 2016. There were two full days of many interesting presentations of participants from Italy, Poland and Romania, regarding the history of higher education and accumulation of human capital, student movements and their aims and also of the activities of socialist experts during Cold War. The research team presented three papers: Patterns of professionalizing history teachers & historians at the University of Bucharest, 1960-1989 (Bogdan Murgescu and Matei Gheboianu), Expert knowledge and political decision in designing the fields of study in communist Romania in the 1970s (Andrei Florin Sora) and The Contribution of Higher Education to the Development of High-End Industries in Romania in the 1980s (Valentin Maier).


*** During August 25-28, 2016, the research team participated at the activities of the first National Congress of the Romanian Historians in Cluj-Napoca. Under the title Public Policies and Decision-Making Processes Relating to Higher Education in Romania (1948-2015), the research team presented the following papers: Recruitment of Graduates from Secondary Education to Higher Education during the Communist Period (Marius Traian Cazan), Nicolae Ceaușescu and the Dynamics of the Romanian Higher Education Between 1965 and 1989 (Andrei Florin Sora), Planning in the Communist Agricultural Higher Education: Attempts and Successes (Valentin Maier). Also, two other presentation were made by Remus Iustin Nică, ”History” in the Romanian Education, Between Necesity and Public Policies (1948-2015) and Gabriel Asandului, Polytechnization of the Romanian Higher Education (1948-1989). The panel was organized by Matei Gheboianu. Also, Andrei Florin Sora and Marius Cazan have organized the Round Table: Anii 1970 sub lupa istoricului. Bilanţ şi deschideri istoriografice.


*** On August 3-7, 2015, the XVIIth World Economic History Congress was held at Kyoto, in Japan. A part of the research team attended this event and on August 7th, during one of the many parallel sessions, Costs and Economic Returns to Higher Education: Competing Models in Historical Perspective (chair Bogdan Murgescu), the following papers were presented: Bogdan Murgescu, Gabriela Elena Jitaru, Who paid for Romanian higher education? Private and public expenditure in historical perspective; Robert Reisz, Planning higher education to achieve economic growth? An econometric model for Romania 1948-1989; Matei Gheboianu, Higher Education between political planning and economic needs. Case study: Romania and Poland (1980-2010).


*** Between 17th and 19th of June 2015, Society for Romanian Studies has organized at Bucharest the International Conference Linking Past, Present and Future. On June the 18th, at the Panel Human Capital and Stock of High Education Graduates in Romania (1948-2010), chair prof. Bogdan Murgescu, discussant Andrei Florin Sora, there were presented the following papers: Higher education and the economy – between liberal expansion and central planning (Viorel Proteasa and Mihai Păunescu), Higher education planning and the GDP in Romania (1948-1990) (prof. Robert D. Reisz), Higher education graduates in Romanian socialist agriculture: between political claims and practical problems (Valentin Maier) and Qualitative analysis of selected cases of professional conversion in postcommunist Romania (Matei Gheboianu).


Later in the same day, the research team took part at the Roundtable Romanian Universities across 1989. From State-Planned Contraction to Market-Driven Expansion, moderator Bogdan Murgescu, with the important participations of professors: Adrian Miroiu, Bogdan Murgescu, Lazăr Vlăsceanu and Jan Sadlak.


*** On November 21st, 2014 the University of Warsaw organized the International Conference Crisis and Resistance in Central and Eastern Europe. At this conference, Matei Gheboianu presented his paper on The Accumulation of Human Capital in Communist Romania and the Transformations of the 1990s. 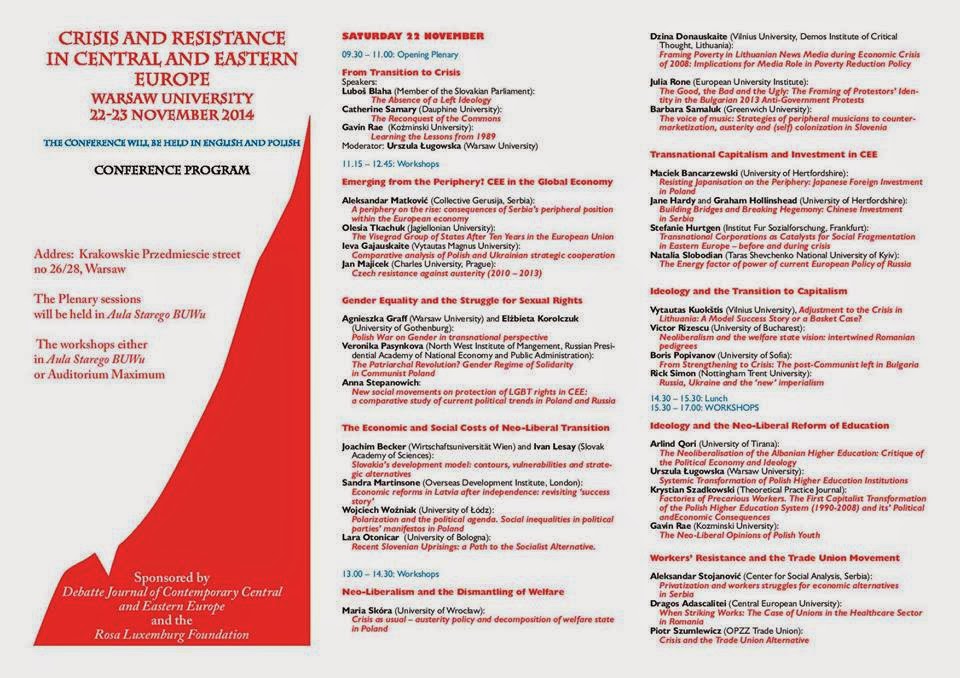 *** On November 20th and 21st, 2014 the University of Bucharest was the host for the national conference History and Historians at the University of Bucharest. Institutional Dimensions-Intellectual Projects (Istorie și istorici la Universitatea din București. Dimensiuni instituționale-proiecte intelectuale). Two members of the research team followed the call for paper of this conference.  Professor Bogdan Murgescu, also the project manager, presented his paper on The Faculty of History from the University of Bucharest and History Teachers from School Education, while Valentin Maier presented Evolution of History Higher Education in Communism – Structures and Statistics. The conference also included Round Table discussions focused on Who and How will wrote History in the 2020s Romania. Formation and Intellectual Profile of the Young Historians.

*** The research team organized on March 28th, 2014 the workshop Current debates and controversies related to human capital development in communist systems with the participations of professor Mihai Korka (Bucharest University of Economic Studies), professor Valentina Vasile (,,Nicolae Titulescu” University from Bucharest) and professor Robert D. Reisz (West University of Timişoara). The workshop held at the Faculty of History (University of Bucharest) was focused on two issues: the concept of human capital and methods to measure it, along with implications of this concept in a communist system; the review of existing research on human capital development in socialist Romania and the analytical perspectives for the future.


*** On December 12, 2013, the project team, prof. Bogdan Murgescu and prof. Robert D. Reisz organized in Bucharest the workshop The Analysis and Consolidation of Series of Statistical Data Regarding the Admission to Higher Education in the Communist Romania. 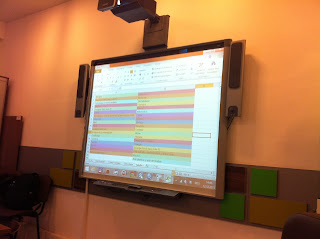 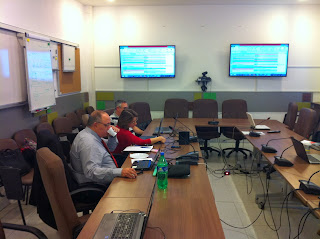 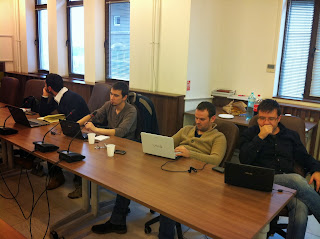 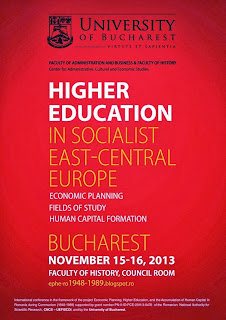 The international conference was organized in the framework of the project Economic Planning, Higher  Education, and the Accumulation of Human Capital in Romania during Communism  (1948-1989) supported by grant number PN-II-ID-PCE-2011-3-0476 of the Romanian  National Authority for Scientific Research, CNCS – UEFISCDI, and by the University of  Bucharest.
At the international conference have participated 18 specialists from Croatia, Polonia, Romania and Ukraine. The program can be viewed here. 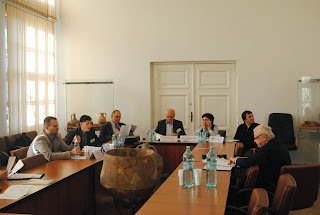 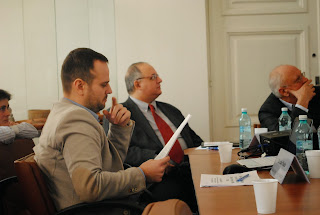 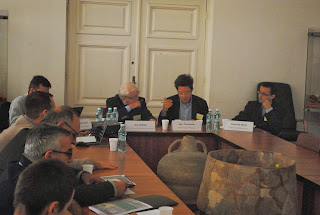 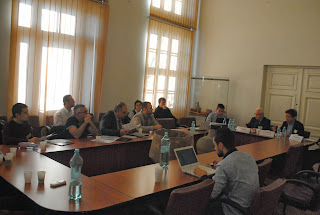 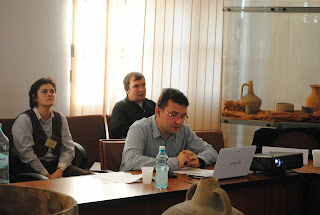 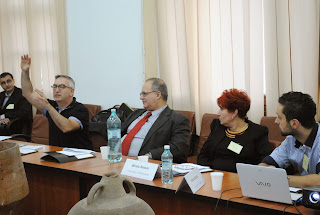 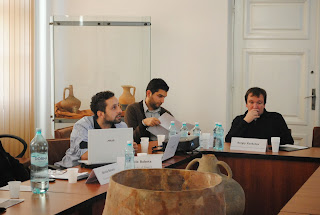 *** On May 30th and 31st 2013 the project manager, Professor Ph.D. Bogdan Murgescu, attended the International Conference Regionalism and Regionalization in Romania. Historical Interpretations and contemporary challenges held at Iaşi. At this conference Professor Ph.D. Bogdan Murgescu presented his study Regionalization and the Issue of the National Network of Institutions of Higher Education. Historical Milestones, constraints, possible solutions. The study follows the spread of the institutions of higher education in Romania with a focus on the periods of the communist regime and afterwards (the causes of the institutional multiplication after World War II, the recession of the 1980s, the new expansion of institutions of higher education after 1989 and the issues raised in this background).


*** On 16th and 17th of May 2013 at the Universitatea din Bucureşti (University of Bucharest) took place the Annual Scientific Conference of the Doctoral School of Faculty of History. At this conference, Mirela Rotaru, member of the research team, has presented her paper on the topic Istoria Universităţii Bucureşti în anii 1980 – admiterea la Universitatea Bucureşti în anii 1980 (The History of the University of Bucharest during 1980s – The Admission at the University of Bucharest during 1980s). The main focus of the presentation was the identification of the most wanted faculties, profiles and specializations in the 1980s, based on relevant statistics and on the analysis of the relation between the candidates presented at the exams and those admitted.


*** During April 25-28, 2013, Ph.D. Matei Gheboianu, member of the research team, participated at The 6th International Conference on Media in Central and Eastern Europe (CEECOM 2013) held in Kaunas (Lithuania) and has presented his paper Liquidity, Fragmentation, and Individualization in the Mediascape.

*** Between 25th and 27th of April 2013, Department of History, Archaeology and Museology of the University ,,1 Decembrie  1918" Alba Iulia organized the international conference Economy and Society in Central and Eastern Europe. Territory, population, consumption. This international conference, was attended by two of the members of the research team which have sustained scientific communications: Professor Ph.D. Bogdan Murgescu, Patterns of Spatial Mobility, Human Capital Accumulation and Economic Growth in East-Central Europe in the 20th century and Ph.D. Candidate Vlad Paşca, Territorial Expansion of Higher Education in Communist Romania (1948-1989). An Outline of Patterns and Factors.

*** During the period between 22nd to 24th of March 2013, Professor Ph.D. Bogdan Murgescu attended the workshop held in the Republic of Ireland (St. Andrews) on the topic The Routledge History of East Central Europe since 1700.


*** On October 17, 2012, Professor Ph.D. Bogdan Murgescu participated at the Summer School Current Theoretical and Methodological Approaches in the political and social sciences were he lectured on the Historical research on the development of human capital in the postwar Eastern Europe.

*** During the period August 26th to September 8th, 2012, the project team carried out research and documentation activities at the Staatsbibliothek zu Berlin (State Library of Berlin) and also at the Institut für Hochschulforschung of Wittenberg, were Professor Ph.D. Peer Pasternack was our kindly host. At the library of the Institut für Hochschulforschung of Wittenberg, the project team had access to several publications related to higher education from postwar period, to the situation of higher education systems in various former socialist countries (especially in G.D.R.) and to conferences of the Ministers of Educations from different ex-socialist countries.

Also at Wittenberg, on August 30th, 2012 the project team has organized the workshop Problems of Researching the History of Higher Education in the Former Socialist Countries with the participation of Professor Ph.D. Peer Pasternack and Ph.D. Daniel Hechler. The project team conducted a visit to the headquarters of the Bundesstiftung zur Aufarbeitung der SED-Diktatur from Berlin, where it found out about the activities and documentation funds of this institution and have laid the foundation for future collaboration on the comparative history of higher education in socialist countries. Contacts were established for future cooperation with the Department of History of Southeast Europe at the Humboldt University (Professor Ph.D. Hannes Grandits).


*** Following the activities of the international conference held at Sibiu, on July the 6th, 2012 the research team organized a workshop at Bucharest called Current debates and controversies about the development of human capital in communist systems, with the important participation of Professor Ph.D. Jan Sadlak.

*** In the period between 2nd and 4th of July 2012, The Society for Romanian Studies has organized at Sibiu an international conference: Europeanization and Globalization: Romanians in their Region and the World. Tuesday, July the 3rd , 2012, a round table was organized by Professor Ph.D. Bogdan Murgescu and moderated by Professor Ph.D. Jan Sadlak on the subject: Romanian Universities during Communism: European Patterns vs. National Imperatives in Planning Higher Education. At discussions that took place, have participated a series of historians, economists, sociologists and philologists, from Romania and abroad. The following day, Professor Ph.D. Bogdan Murgescu held the keynote Historians and the Study of Romanian Communism.

*** Ph.D. Candidate Matei Gheboianu took part at the International Congress of Press History which was held at Chișinău, April 27-28, 2012.

The conference was organized by the Center of Administrative, Cultural and Economical Studies of Universitatea din Bucureşti (University of Bucharest) as part of the research project PN-II-ID-PCE-2011-3-0476 Economic Planning, Higher Education, and the Accumulation of Human Capital in Romania during Communism (1948-1989), in cooperation with the project POSDRU/89/1.5/S/62259 Ştiinţe socio-umane şi politice aplicative. Program de pregătire postdoctorală şi burse postdoctorale de cercetare în domeniul ştiinţelor socio-umane şi politice.
Also, together with Professor Ph.D. Robert D. Reisz, the research team has organized the workshop Statistical methods for the social sciences and the humanities, and their implications for collecting and organizing historical data, held at Bucharest on February the 15th and 16th 2012, in which some of the theoretical and methodological issues, relevant for the success of research project were clarified.